We know in forensic engineering that a good picture is worth a lot.  For that reason we take many photographs and videos during our investigations.  And we’re alert to new ways of taking pictures of a failure or accident site.

(See interesting pictures below, if you wish to jump ahead in this short item, but come back and read the posting).

We also study existing aerial photographs when the ground in the vicinity of a failure or accident might figure in the cause.  It’s called ‘terrain analysis’ in engineering and it’s very useful.  We look at the topographic maps made from these photographs as well.

But aerial and satellite photographs are taken from 1000s of feet in the air and detail is lacking for the smaller, more compact sites typical of most failures and accidents.  This is also pretty well the case when you hire a small plane or helicopter and take photographs from the air.  You can get pictures from a lower altitude this way but there are restrictions on how low a plane can fly over a built-up area.

I’ve attempted to overcome this by taking photographs from the bucket of a boom truck hired for the purpose.  For example, I did this during my investigation of the John Morris Rankin fatal car accident.  I’ve also taken photographs of sites from the upper floors and roofs of nearby buildings and from the buckets of backhoes and excavators raised – with me in it, for the purpose.  But these photographs are oblique rather than at times preferably vertical, and also quite low level.  Pictures from a little greater altitude would be nice.

Imagine my interest when I chanced to meet a chap last fall in a park who was flying and taking aerial photographs with a small helicopter about one and a half to two feet in size.  It was a model, multi-rotor helicopter, a ‘quadcopter’ operated and flown remotely from the ground.  A quadcopter has four rotors.  These aircraft also come with six or eight rotors.  The more rotors the greater the stability of the ‘copter.

The quadcopter was fitted with two cameras for taking oblique and vertical photographs, 100, 200, and, I understand, up to a 1000 feet above a site.  Robert Guertin, the operator, is a professional photographer perfecting this technique.  He’s in Dartmouth, Nova Scotia.

One type of camera is the GoPro that is readily available in camera shops in Atlantic Canada.  There are other cameras that give even higher quality photographs.

A few days later, the grandson of a friend – a retired forensic engineer, got in touch to tell me about his hobby of taking pictures – from the air, from a hexcopter, a six rotor helicopter.  Zack Keating works in film and television in Toronto.  He’s also a photographer and presently in Dartmouth.

Twice in a few days I’m introduced to a new technique for taking photographs during forensic investigations.

The Chronicle Herald also reported recently that the RCMP have bought five of the multi-rotor aircraft, “drones” as described in the press, for their surveillance work.  These ‘copters cost in excess of $30,000 a piece and, I understand, require two people to operate remotely.  Robert and Zack are flying aircraft costing closer to $2,000 to $3,000.

I’ve examined several photographs taken by these chaps and I’m quite impressed by the detail and resolution.  I presently believe the pictures from these less expensive aircraft will be quite useful for forensic engineering investigations.  I’m carrying out field trials with these multi-rotor helicopters now and will report later on what I learn.

Figs 1 to 5 in the Appendix contain aerial photographs by Robert.  Figs 1 to 3 and Figs 4 and 5 are sequences of pictures progressing from distant shots to close-up views.  I envisage these types of pictures being quite useful in forensic engineering investigations.  Fig. 6 is a photograph by Zack of a hexcopter in flight. 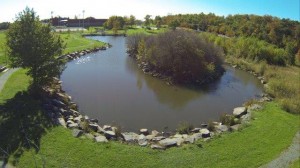 Fig. 1: Oblique aerial view of a duck pond in a park in Dartmouth, Nova Scotia. 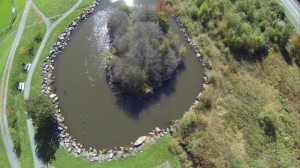 Fig. 2: Vertical aerial view of an island in the duck pond. 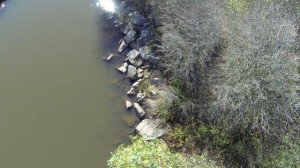 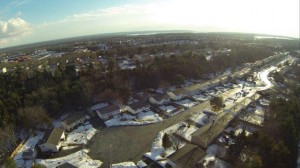 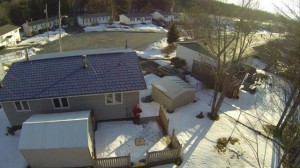 Fig. 5: Near vertical aerial view of residential property in the residential area in Fig. 4.  Note the operator on the deck controlling the hexcopter.  Also the 2′ x 2′ square landing pad on the deck. 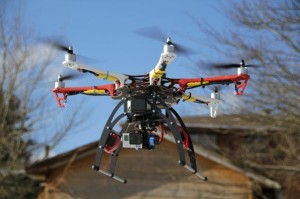