Invaluable, is the best way to describe this forensic method.  Drones fitted with cameras taking low-level, aerial photographs and video at the scene of an engineering failure or personal injury accident.  It`s proving to be just that – invaluable, during a forensic engineering investigation.

I’ve used this photographic method twice in the last few months to gather data and to document conditions at sites in eastern Canada.

I understand the RCMP are using drones fitted with cameras to photograph traffic accident sites.  I`m sure in other ways as well.  I can imagine they are as enthused as I am.

Typical low-level, oblique aerial photographs are shown in the Appendix.

I’ll definitely take aerial photographs at the site of the next slip, trip, and fall accident that occurs outdoors that I investigate.  Also flooding and drainage problems, and fuel oil spills.

For that matter, I’ll take aerial photographs and video of the scene of any failure in the built or natural environment when the failure is comprised of some outdoor elements. Also photographs of features of interest on the upper levels of structures both outside and inside – where the structure is large and open inside and suitable for flying a drone.

Low level aerial photographs are a big step up – no pun intended, from forensic engineering terrestrial photographic practice in the past.

For example, old methods from past civil litigation cases….

I used binoculars not too long ago to examine the condition of the second and third levels of a building.  Ice had fallen from the building and seriously injured a pedestrian.  Boom trucks have also been used to facilitate this type of examination.  I`m sure people have repelled down the side of a structure from the roof or upper levels to do this.  I used a boom truck and a sea king helicopter during one forensic investigation to film the re-enactment of a fatal motor vehicle accident.

Most of the photographs and video taken during my recent cases were oblique – tilted at an angle to the horizontal, but some were vertical.  Tilt is adjusted by the pilot during flight.  The photographs are taken with cameras mounted on a small drone – in this case a four rotor, quad-copter, flown remotely by the pilot on the ground at the site.  The drone is also fitted with an altimeter to record height.

There are six and eight rotor drones available. More rotors increases the control and stability of the drone and the on-board camera.  Heavier, higher quality cameras with increased resolution can be carried by drones with more rotors.

I direct the photographs and videos to take from a monitor mounted on a tripod near the pilot.  The directions include:

In my cases, most photographs and video were taken at 45 to 55 metres, some were at a few metres, and one was close to 100 metres above the site.

The photographs and video are down loaded to a disc for use by the forensic engineer and client.  You get 100s of aerial photographs of a site using this technique.  It takes much more time to review, select, and study the photographs for evidence than it does to take them.

It took two to three hours to fly and photograph each of the sites I’ve investigated recently.

Experimenting with this method

I’m experimenting with this method – it’s new to forensic engineering, and I’m trying new things and I`m liking the results.  This time at one of my sites I took high – several 10s of metres, distant photographs from different angles to show the general setting – the context of my site and it’s problem.  Then I took close-ups at a height of a few metres showing the specific location of the problem I was investigating.

Also at one of my sites this time I marked the location of features of interest on the ground with sheets of white paper that would be visible from the air.  These important features would not stand out otherwise.  I also noticed important features on studying the aerial photographs of one site – unexpected, forensic engineering data, evidence, that would not have been seen on the ground.  This data will be quite valuable in my assessment of the problem at this site.

In future experiments, I will investigate increasing the accuracy of scaling distances from the photographs – a task of interest often enough, by setting horizontal control markers on the ground before photographing the site.

Another just occurred to me as I was checking this blog before publishing.

These low level aerial photographs will be good for terrain analysis and evaluation of the small compact sites typical of engineering failures and accidents.  Terrain analysis is a valuable technique in geotechnical and foundation engineering investigation for a preliminary assessment of the soil conditions beneath a site.

This photographic technique is easy and inexpensive – hundreds of dollars compared to thousands.

The drone pilot operates the equipment and flies the drone.  The forensic engineer directs the photography.  This is not too much different from an engineer knowing what terrestrial photographs to take during an initial visual examination of a site. (Ref. 2)

I can easily imagine that low level aerial photography will be standard fare in the future.  Like terrestrial photography during many initial visual assessments where an element in the forensic case is the terrain at the site of a failure or accident.

There is a bit of a learning curve for viewers of oblique aerial photographs because we are not use to seeing a site this way.  But a curve we quickly climb when we see the advantage of these photographs and the additional evidence that can be got from them.

Ensure your expert is familiar with this technique

It seems important for your next problem, engineering failure, or personal injury accident that you ensure your expert is familiar with this forensic engineering method. 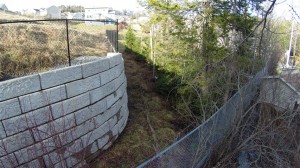